1995 was a very special year in the history of Chiropractic.

Growing up in a chiropractic family, I have had the good fortune to have been taught the history of chiropractic from a very early age. I can still remember doing my first “biography” in 3rd grade. I remember other children chose hockey players, Prime Ministers, and I think a couple of kids even tried to squeak in biographies of their parents.

I chose D.D. Palmer, the founder of the chiropractic profession. I am sure my eight year old mind debated for hours on who I should choose: D.D. or B.J.? It must have been a harrowing decision for me, but am pretty sure my parents were the deciding factor. This would be the first time that I heard the story of D.D. Palmer helping restore Harvey Lillard’s hearing through the delivery of the first chiropractic adjustment.

While most Chiropractors are familiar with this historic event, very few know what became of Chiropractic’s most famous patient.

Following a move to Seattle in 1991, my mother, Beth, and father, Dr. Darrell Gibson, D.C. were attending a barbeque with some friends. Many of these friends were chiropractors themselves, including Dr. Rod and Linda Handly, D.C., Dr. Dave and Judy Butters, D.C., Dr. Butch and Sandy Corbin, D.C., and Dr. Steve Bartusch, D.C.

The majority of these friends were natives to the Seattle area, and Dr. Bartusch mentioned the rumor that Mr. Lillard had settled in Seattle, and following his passing, had been laid to rest somewhere in the area.

Over the next few years this rumor would get brought up every now and then when the group got together. In 1995, my mother decided to take a greater interest in the mystery, and along with my father, and Dr. Rod and Linda Handly, they attempted to solve it.

Over the course of six months(keeping in mind this was pre-google), researching old obituaries and records in the Seattle Public Library, she found a cemetery listing, The Lakeview Cemetery in Seattle, for one Harvey Lillard 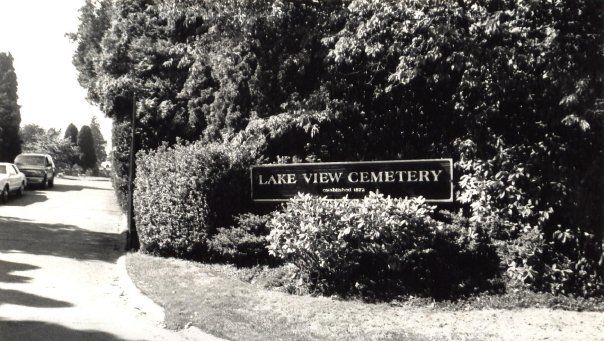 With this information in hand, Beth was forced to contact a local historian who researched this type of material. This historian was able to find a decades old map of the cemetery which she happily passed onto the group.

The Lakeview Cemetery just happens to be the same resting area to one of Seattle’s most famous residents, and world wide phenomenon, Bruce Lee. According to the caretaker, Mr. Lee’s memorial receives thousands of visitors each year.

Navigating their way through the paths of this large cemetery, they approached the area that the map signified. It had no Bruce Lee type memorials, and was nothing more then grass, dirt, and was one of the least maintained areas of the grounds.

Feeling disappointed that the map had failed them, and all the time that had been wasted, Dr. Handly would make any Indiana Jones fan proud. He went to his car, returned with a tire iron, and returned to the empty area. Doing his best to count off the approximate area of where Mr. Lillard was supposedly buried, he stopped, and stuck the tire iron into the ground. Through 4 inches of sod, the iron came to a halt, and the group was filled with excitement.

As the others watched on, Dr. Handly cut a rectangle around the area where they now believed the headstone to be. My father Darrell, peeled the sod back and after wiping away the bugs, mud, dirt, they stood back to read the headstone and admire their handy work.

William H. Lillar? LILLAR!?! Not only was his headstone buried under 4 inches of grass and grime, but to add insult to injury, his headstone was a temporary one, and they SPELLED HIS NAME WRONG!

This marker was meant to replaced at some point following Mr. Lillard’s death, with a permanent marker. It became crystal clear that history might be remember Mr. Lillard in some sense, but his friends, family, and chiropractic had ultimately forgotten him.

One of the best things about being a Chiropractor are the personal relationships that can foster, just by being in the same club. The years of travel and commitment forged bonds between my parents and their friends that continue to this day.

When it comes to William H. Lillard, a couple of their friends came through like champions.

Dr. Sid and Nell Williams were brought up to speed on the events surrounding this recent discovery. In short order, Dr. Sid and Nell were responsible, through Life University, for replacing Mr. Lillard’s temporary headstone with a permanent one.

On top of this, they also commissioned a bronze bust of Mr. Lillard, and now have the original marker and bust on display at Life University.

As the fourth anniversary of my mother’s passing approaches, I wanted to share this small part of history with the Chiropractic community. I am hoping that this might help more of us to get inspired about our history, and take a vested interest in supporting our entire profession. Unity for a common goal is what my mother cared about, whether it is between neighboring D.C.’s, helping to find Harvey Lillard, or organizing events for good causes. These journeys create the lasting bonds that help support each other in times of need, and give us the strength to give back, when the easier choice would to look the other way.

As thousand’s of people continue to visit Bruce Lee’s memorial each year, I hope that Mr. Lillard might get a few more visitors on their way through Seattle. Maybe even a few from Seattle.

*If any of you choose to pay homage to the man who received Chiropractic’s first patient, it would be great to receive a photo from you at the marker. Feel free to EMAIL one to me.*