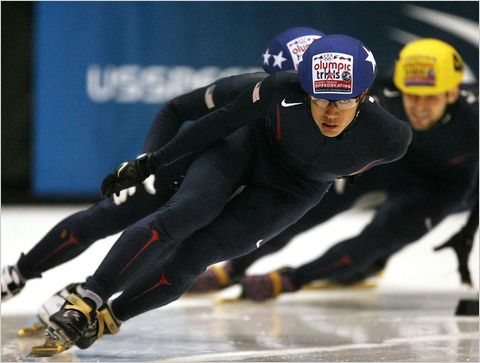 Since we are all in the Olympic chiropractic spirit, I thought I would post my second Olympic post about a chiropractor on the same day. It represents the number of wins Team Canada needs to take the gold in men’s hockey. Dr. Scott Swanson let us know on his blog that Dr. Bill Moreau, was in fact, in charge of J.R. Celski’s rehabilitation following a serious cut to his leg during a 500m race in September of 2009.

Dr. Swanson comments on the fact that nowhere was Dr. Moreau mentioned as a Doctor of Chiropractic in the entire interview. We are both sensitive to this as chiropractors, as it seems the media will discredit our profession at any given opportunity, but never give it when it is due.

Another find reveals that there are potentially more chiropractors volunteering their services at this Olympic Winter Games then ever in its’ history.

“We have 21 chiropractors from across Canada on the 2010 Olympic and Paralympic staff, and I am proud of them all for volunteering their time and services to the international athletes,” said Walker, also part of the Canadian medical team at the 1988 Calgary Winter Olympics, 2007 Rio Pan Am Games and chief chiropractor for the 1994 Victoria Commonwealth Games.”

Great news for chiropractors, fans, and the athletes!